On July 21, 2020, Nevada state’s Cannabis Compliance Board (CCB) handed down a host of penalties, fines and license revocations related to what I call the “wild west” operation of CWNevada, which operated a number of marijuana facilities in and around the Las Vegas area. (Read more about the CCB’s actions here – Nevada Independent – and here – Nevada Current.) 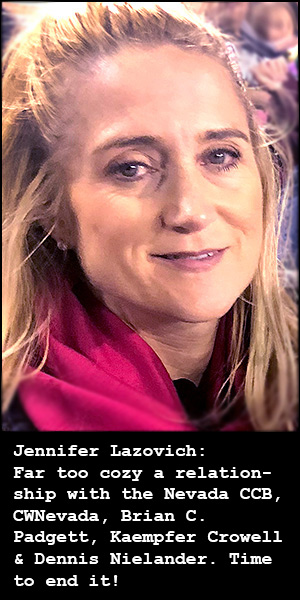 In my opinion, things are just a little too cozy at the CCB. The CCB, Kaempfer Crowell, Dennis Neilander, Jennifer Lazovich — all are too tightly tied together in this cannabis industry. Neilander’s mere presence on the board could have a chilling effect on decisions related to CWNevada, owners Padgett and Lazovich, and conflict with CWNevada’s representation by Kaempfer Crowell.

Regardless of his voting abstention in the CWNevada case, with his presence on the board, the fact that he and CWNevada minority owner Jennifer Lazovich are colleagues at the same law firm in which she is a partner, which has represented CWNevada and majority owner Brian C. Padgett, there’s too high a probability that all of that together could influence the CCB. Call it a confluence of influence. Regardless of the latest action taken by the CCB against CWNevada, as strong as it was, without the presence and connections of Neilander’s, I would be so bold as to suggest that the CCB’s sanctions on CWNevada could have been even stronger.

This conflict of interest between the CCB, Kaempfer Crowell, Dennis Neilander, Jennifer Lazovich, Brian C. Padgett (who by the way has fathered children with Lazovich) and CWNevada cannot be allowed to continue. These are truly familial connections. They need to be broken by the state.

This entry was posted in Uncategorized. Bookmark the permalink.